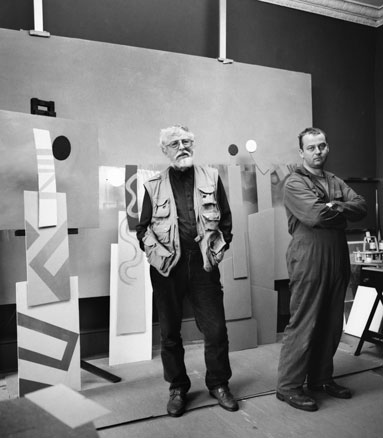 Jonathan’s father, Geoffrey Clarke (1924–2014), was an innovator. Studying stained glass at the Royal College of Art in the late 1940s, he soon began to experiment with glass embedded in coarsely built-up plaster – transforming a two-dimensional medium into sculpture. He made up his own rules for printmaking, creating symbolic, deeply etched or grainy designs on steel plates. In 1950 he broke further fresh ground by becoming one of the first of a new generation of sculptors to use iron. Two years later his work was chosen to represent Britain at the Venice Biennale in 1952, and, aged only 27, his international professional career was launched.

In a sense, though, Geoffrey Clarke had already entered the public arena. He was commissioned while a student to contribute to the Festival of Britain, then to create an iron sculpture for the prestigious Time and Life building in New Bond Street. A commission for the 80ft-high bronze Spirit of Electricity (1958–61), for Thorn House, convinced him that he needed to find a more cost-effective method for casting work that did not depend upon professional foundries. He had already experimented with open-casting, in aluminium, from designs drawn in a sand-bed at the foundry he set up at his house in Suffolk. This made it possible to produce aluminium reliefs, for passenger liners, schools, colleges and banks. But it was hearing of a new technique, pioneered in the United States, which showed the way forward, allowing him to cast three-dimensional works in his own foundry.

Again testing new ground, in the early 1960s Geoffrey Clarke adopted full-mould casting: a technique involving an innovative material, expanded polystyrene, buried in sand, and then vaporised by molten metal to leave an exact replica of the original form. The polystyrene could be carved with knives or a hot wire, glued together, smoothed with sandpaper or left rough. Aluminium proved to be particularly suited to the process, but other than that, Geoffrey found his own method of working, refining the process to his own needs. He was able to produce larger and increasingly complex architectural sculptures, and, because of the volume of work, he could employ foundry assistants and thus fulfil commissions from design to installation.

Photographs from 1963 show Jonathan (aged two) looking at the massive aluminium screens for the Guards Chapel, in the yard at home with his father. The size of these screens brought them to the attention of the technical journals as one of the largest experiments successfully to use full-mould casting, and a year later Shell made the documentary film, Cast in a New Mould, to promote expanded polystyrene’s potential as a sculptural material. Geoffrey Clarke would continue to test the applications of the process throughout his long career.

It is this spirit of experimentation – combined with practicality – that binds the work of Geoffrey and Jonathan Clarke. From the age of sixteen Jonathan worked side-by-side with his father, assisting, watching the mistake and (more frequently) successes of casting. Necessarily there are parallels between the two artists’ work. The casting technique has its own particularities, which can be exploited, or, to a certain extent, thwarted. And Jonathan has, again to a certain extent, followed his father in undertaking commissioned work, particularly for the Church. However their work is quite distinct in other ways, in its aesthetic, its surfaces (the degree of polishing, or darkening with wax, and the occasional application of colour), and of course its themes. Surprisingly, given its speed and versatility, the casting process has not been exploited to any extent by other sculptors. Its principal drawback is that each sculpture is unique, since the polystyrene model is destroyed during casting. Yet even this can be an advantage – freeing the mind to create variations or to develop ideas in different directions. For his part, Jonathan remains committed to the technique of casting, and to its potential to realise as yet unimagined forms.