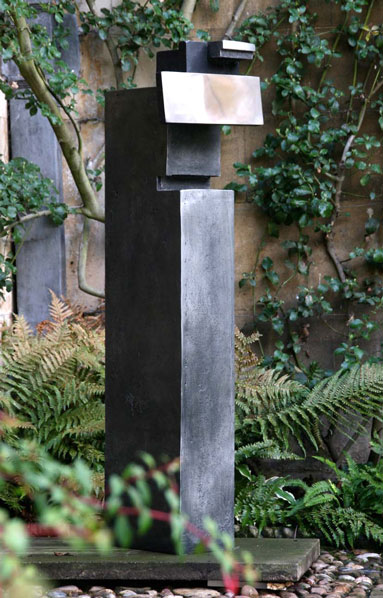 Jonathan came to North House Gallery in search of a gallery that would suit his personal work produced outside his commissioned projects and that would allow him an outlet for his experiments with new subjects and materials. Convivial, with a ready laugh, and the snappiest dresser I know, he has been a joy to collaborate with on two shows and the beginnings of the next. As the children of artists we share the bond of owing our aesthetic eyes to our respective fathers, a debt that we freely and gratefully acknowledge. It is important however to note other sculptors who have influenced him: Chillida, David Smith, Caro, and Louise Nevelson (wall boxes painted in monochome black or white).

Work from the last five years has ranged in scale from large floor pieces for inside and out to small pieces designed to be worn as jewellery. Interest in the the surface has ranged from iron table sculptures expected to rust outside in the weather to gilding, practised with such success on the aumbry in Chichester Cathedral,and painting the cast aluminium white or black. As with all artists there is the temptation to stick with what they know best and although Jonathan continues to experiment with the finishing, he knows precisely what he is doing with the untreated aluminium.

He is still drawn to the technique which marries this modern material with a traditional casting method to give a strangely organic quality that is not normally associated with aluminium. The surface sometimes appears like rock or hewn stone: this is a function of the way the sand moves when it is poured on before casting.

Whilst extruded aluminium can be anodised, cast aluminium cannot, so it needs to be coated or waxed to change the surface. In Jonathan’s eyes though there is merit in the unadulterated white metal which reflects other colours around, in a way that bronze does not. Its affinity with sandstone and granite has led to the success of many of his projects in cathedrals and churches and in other architectural settings inside and out.

Another reason for persisting with his familiar casting technique is the ease with which the original form can be cut, without a preparatory drawing, directly out of polystyrene, elements can be added and errors corrected. Indeed major mistakes can be happily jettisoned with the financial loss less than a scribbled drawing on a sheet of good quality paper.

This direct way of working leads to interestingly unpredictable outcomes; so an element of trust is required on the part of the gallery in the run up to a show. What emerges from this energetic professional sculptor are modern works with a surprisingly broad range of sources of inspiration and frames of reference and slightly odd dyslexic puns for titles.